The graph below shows the number of overseas visitors who came to UK for different purposes between 1989 and 2009.

Summarlse the information by selecting and reporting the main features,and make comparisons where relevant. 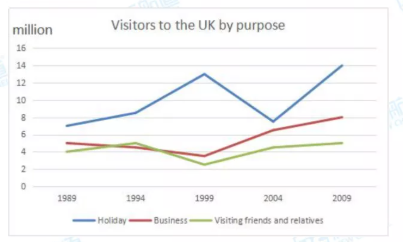 The line graph illustrates how many foreigners went to Britain to do business, take a holiday, and visit friends and relatives from 1989 to 2009. Overall, the number of people travelling to the UK for these three purposes experienced a rising trend, albeit to widely varying degrees.