The diagram below shows the age groups of the users on social media in Australiain 2011.

Summarise the information by selecting and reporting the main features,and makecomparisons where relevant. 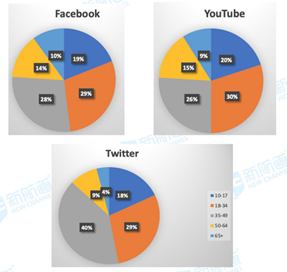 The pie charts compare user distribution patterns based on three different social media in Australia in 2011.

According to the diagram, in terms of Facebook, users aged between 18 and 34 occupied the largest proportion, at up to 29%, followed by subscribers in the age group of 35-49, reaching 28%. The figures for the other age groups were relatively lower, among which senior users at the age of 65 and over constituted the least share (merely 10%).

As to the Twitter user distribution, the largest percentage belonged to the middle-aged group, with 40% of users being 35-49, a bit higher than that of users at the age of 18-34 (29%). Although only a small part of Twitter subscribers were in the 50-64 age bracket, senior users aged over 65 were still ranked last.

Overall, the young and middle-aged were the main components of social media users, while the elders showed little interest.